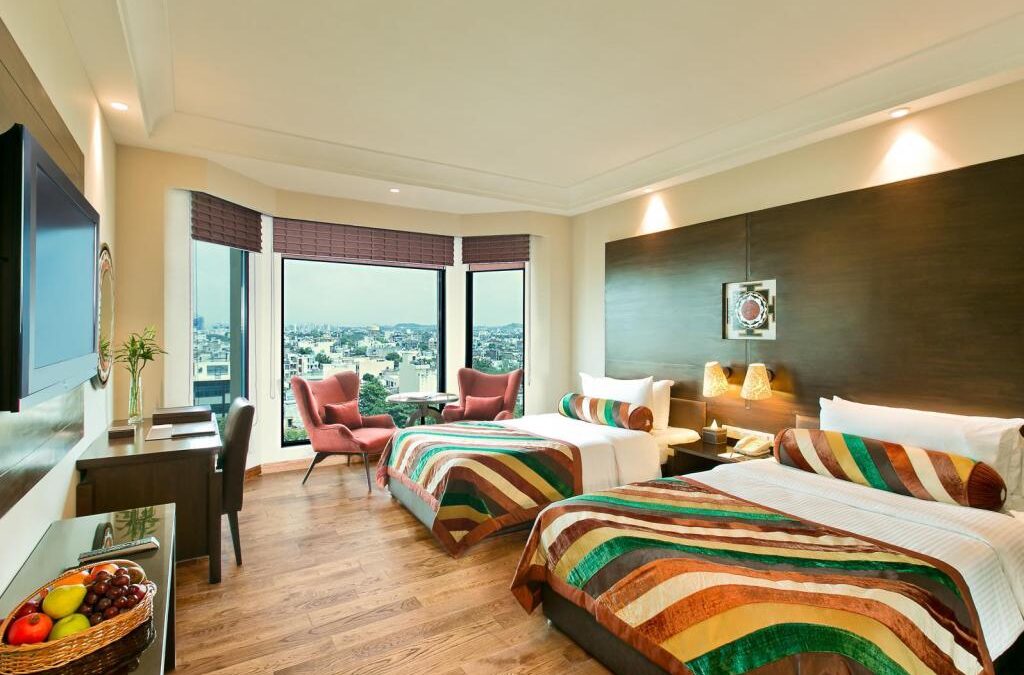 A Royal Reverie in Jaipur

Jaipur, also known as the Pink City, is Rajasthan’s capital and boasts majestic palaces and rich culture. The city was constructed on pink sandstone, which alters its color with changes in sunlight. The city has a lot to offer to its visitors with its enormous palatial grounds, authentic Rajasthani cuisine, local markets brimming with Rajasthani artifacts, narrow lanes, and the centuries-long history of the Rajputs. Not just the rich culture, you can also expect a luxurious and comfortable stay in Jaipur at some of the best 5-star hotels in Jaipur.

Here are a few incredible places to visit when in Jaipur –

The LaLiT Jaipur: First things first, when in Jaipur, make it a point to book your stay at The LaLiT Jaipur. Situated near the airport, the City Palace, and the Jantar Mantar Park, the LaLiT Jaipur has elegant rooms modeled with Rajasthani architecture in mind. They have several amenities like an outdoor pool, two restaurants serving authentic Rajasthani cuisine, a spa for you to relax, and a business center.

Hawa Mahal: Among the most well-known tourist spots in Jaipur, the Hawa Mahal was built by the former Rajput king Maharaja Sawai Pratap Singh. When he saw the structure of the Khetri Mahal, he was so enamored by its beauty that he had the Hawa Mahal constructed. The lattice design of the palace was instituted so that women of the royal family could practice the purdah system and also witness celebrations on the street without being noticed. The impeccable design of the mahal with the Venturi effect allows ventilation in the palace, which is necessary for the scorching summer.

Chandra Mahal: The former residence of the Rajput kings and the current home of the Maharaja of Jaipur, the Chandra Mahal covers a substantial portion of the City Palace complex. It was considered a significant military and strategic post built by Jai Singh. Every floor of Chandra Mahal or Chandra Niwas has wonders for one to explore. Boasting a seven-story citadel, one can view the Jaipur landscape and witness the breathtaking sunset.

Albert Hall Museum: Whether you are a history enthusiast or not, visiting the Albert Hall Museum is a must as it is the oldest museum in the state. Built by Samuel Swinton Jacob, the building has British, Saracenic, and Rajput influences. The museum hosts several artifacts dating back to the Mughal, Gupta, Kushan, and Sultanate periods. The museum was named after Albert Edward, who laid down the foundational stone on his visit to the colonial state in 1876. Built in the middle of the Ram Niwas Garden, the British had initially planned to use the hall as a concert hall, which is why it closely resembles the Victoria and Albert Hall Museum.

The Future of Hotel Linens Manufacturing: What to Expect in the Years Ahead

The best Restaurants in St Tropez

Buying A Yacht In Malaysia: What You Need To Consider

A Shopping Holiday In Bangkok

What To See & Do When Visiting Vientiane In Laos